Tell Them, I Am

Tell Them, I Am is about the small moments that define who we are and who we are not. The stories are universal; the voices are all Muslim. Host Misha Euceph sits down with scientists, celebrities, chefs, fashionistas and more in this intimate and compelling series.

PocketcastsStitcherSpotifyMegaphoneOvercast
Support Tell Them, I Am
EpisodesMeet the TeamAbout
All Shows
Episodes
Trailer
Tell Them, I Am is about the small moments that define who we are and who we are not. The voices are all Muslim. The stories are universal.  With a new episode every weekday this Ramadan, host Misha Euceph opens a window into the lives of Tan France, Alia Shawkat, Ramy Youssef, Reza Aslan,  Mercedes Iman Diamond and others.
EPISODE 1Misha
Misha Euceph heard Maz Jobrani’s stand-up comedy when she was 12 years old. One line stuck with her so much that it’s the reason she’s making this show today: “I want to show a Muslim baking a cookie."
EPISODE 2Tan
Tan France is the Queer Eye fashion guru to whom people would pay good money to get advice. His love for giving advice traces back to one hot afternoon watching his siblings play Game Boy.
EPISODE 3Deana
Deana Haggag is the CEO of United States Artists, but her parents still think she’s an interior designer. One moment in college stopped her from ever trying to explain her world to them again.
EPISODE 4Najma
Najma Sharif is a writer with bylines in Vice, Teen Vogue, and Broadly — but as a teenager, she was just Najmalicious1000, a player trying to get with as many boys as possible and creating a whole romantic life on the internet.
EPISODE 5Ramy
Ramy Youssef has his own show on Hulu, but it wouldn’t have happened if it hadn’t been for one single moment brushing his teeth when he was 19 — and half his face went totally numb.
EPISODE 6Reza
Reza Aslan is the author of No God But God and Zealot, as well as a known TV personality. His political education and distrust of authority began with a game of chess when he was just 7 years old.
EPISODE 7Wazina
Wazina Zondon is a sex educator and co-founder of the show Coming Out Muslim. She’s been able to understand herself better because of her relationship with one person.
EPISODE 8Amirah
Amirah Sackett is a hip-hop dancer who learned the art of forgiveness from a swarm of bees.
EPISODE 9Ryan
Ryan Harris is an NFL Super Bowl champion who, in one moment, was forced to redefine what it meant for him to be a man in a culture of toxic masculinity.
EPISODE 10Sahar
Sahar Jahani is a TV writer whose relationship to her heritage changed during one agonizing road trip in a Paykan through the Iranian countryside.
EPISODE 11Ahamed
Ahamed Weinberg is a comedian with a series on Comedy Central. Once he hit school age, he started realizing that his parents’ values weren’t the same as his peers’. As a result, deciding his own beliefs proved, well, complicated.
EPISODE 12Alia
Alia Shawkat is known for her role as Maeby Fünke on Arrested Development, and in between shoots, she loved smoking weed and pushing her dad’s buttons. One trip to Jordan changed that and helped her realize who her father was in the world.
EPISODE 13Salman
Salman Agah is a legendary skateboarder and owner of Pizzanista, a popular L.A. pizza joint. But back when he was a teen in San Jose, he had no reference for what his future might look like or where his ambitions were taking him.
EPISODE 14Iqbal
Television actor Iqbal Theba gives us an inside look on a career that many in the entertainment industry know well — service. And this probably won’t come as a surprise, but he was really good at it.
EPISODE 15Reem
Chef Reem Assil owns Reem’s California and Dyafa, two popular middle eastern eateries in Oakland, California. But growing up, she had a knack for filmmaking, and at 12 years old she premiered her first (and only) film on her local public access station.
EPISODE 16Emmen
Emmen Ahmed is a freelance illustrator and student based in Detroit (shout out to her amazing artwork for Tell Them). Her grandfather had a huge influence on her, and when he passed away a few years ago, she struggled to maneuver through life without him.
EPISODE 17Maz
Maz Jobrani is, and apparently has always been, a comedian and actor. As a kid, he was a natural performer, but had a habit of stifling that part of himself.
EPISODE 18Omar
Omar Offendum is a rapper and poet. When he was 15 years old, his affinity for Arabic poetry came to life while reciting a piece during Nizar Qabbani’s memorial at Georgetown University in 1998.
EPISODE 19Mercedes
Mercedes Iman Diamond has been participating — and dominating — drag competitions and performances since she was 21. She speaks about how a stage became her safe place.
EPISODE 20Layla
Layla Shaikley is a tech entrepreneur and Instagram influencer. When she was young, she discovered two things. One: that how you dress holds more meaning than you think. And two: that you can definitely use this to your advantage.
EPISODE 21Munazza
Munazza Alam is a Harvard-educated astrophysicist. When she was in college, her dad’s complicated liver replacement opened her eyes to how the universe can feel so full and so empty at the same time.
EPISODE 22G. Willow
G. Willow Wilson is a novelist and comic book writer, known for her run on the Ms. Marvel series. When 9/11 happened, the world seemed chaotic to say the least — but Willow found that sometimes all you need is a little Neil Gaiman to put you back on track.
EPISODE 23Akbar
Akbar Ahmed is an academic, poet, former diplomat, and all-around renaissance man. In Tell Them, I Am’s final story of the season, Ahmed recounts how a single train ride when he was 4 years old changed his life’s direction forever.
View All Episodes
Meet The Team Misha Euceph, Host & ProductWhen Misha was 18 years old, she had a crush on a guy who wore Sperry’s, so she went and bought Sperry’s. Specifically, the all-leather, beige top-siders. The crush didn’t last very long, but her love for wearing men’s shoes did. Up until that point, Misha begrudgingly wore heels, following the lead of women in her culture, and sorority girls at her college campus. As she started buying oxfords, loafers and sneakers, she decided that would be her look: incredibly feminine in her clothes, but always masculine in her shoes. To this day, you’ll rarely spot her in heels, ballet flats or wedges. She’s not entirely sure if this is a rebellion, a comfort, or a reflection of her personality being both masculine and feminine. Arwen Champion Nicks, Executive Producer & EditorWhen Arwen Nicks was a sophomore in high school, she accidentally lead a walk out at her school. This happened after she called out her teacher for his inaccurate work on a calculus equation. He responded, "If you think you are so smart, why don’t you just teach the class?” She grabbed her math book and said, “Fine, if anyone here would like to actually learn math, follow me.” Then, she walked out. When she got to the school’s lobby, she turned around and saw that the entire class had followed her. So she sat on the back of a chair and directed everyone to open up to the appropriate page and began her lesson. The school tried to throw her out and failed. She has been walking out of rooms full of misinformation since. 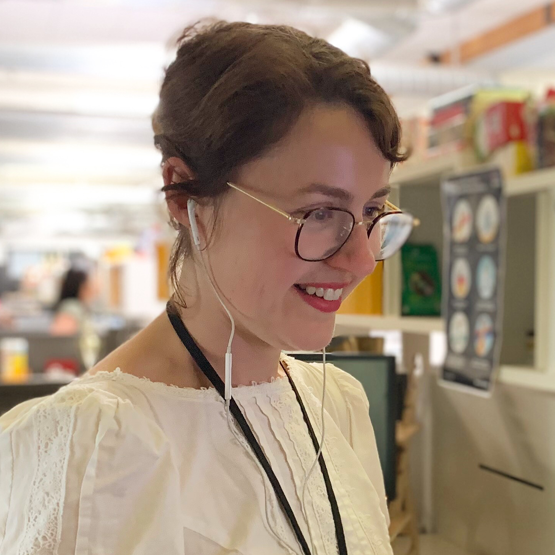 Mary Knauf, Lead ProducerFourth grade Mary was her school’s unofficial handball champion. She also had a deep and lasting hatred for her younger brother John, who hated her back. Her reign as handball queen came to a halt one day, when she ran full speed into a cement wall and broke her arm, Dr. Seuss style. John parted the circle of kids she was surrounded by, saying “Give her some room people, give her some room!” like he was a professional boxing coach (although, he was crying at the same time, which professional boxing coaches don't do). He then picked her up and took her to the nurse’s office. She, like many people, has a complicated relationship with her family. This was her first experience of feeling that inexplicable, strong connection with a family member while simultaneously hating them. It was the first time she had to live in two emotional worlds at once. 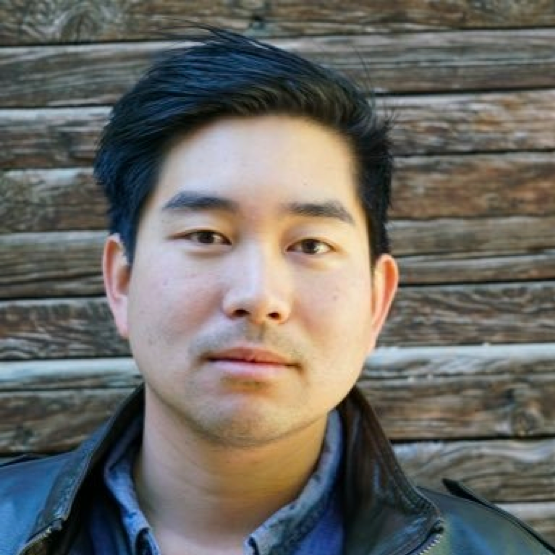 James Kim, ProducerEveryone on my block was a skater. This was the ‘90s and all the neighborhood kids would read Thrasher, watch the iconic Video Days, and of course, skate. My friends got pretty good and were able to do grinds, double kickflips, pop shuvits. And me, I was still trying to master the ollie. Eventually, they wanted to up the ante by building a ramp. It was about waist high, nothing too extreme, well at least for them. One by one, each of the neighborhood kids would launch off the ramp, do a simple trick, and land perfectly. And when it was turn, my friends were like, “You don’t have to do this.” I tried to play it cool and said, “No, I got this. This is a piece of cake.” So I took a deep breath, sped up, and when I got to the top…I kicked the skateboard downward. I’m in mid-air, and I’m seeing the board turn vertical. So I spread my legs to try to brace for impact, and as my feet touch the ground, the board shoves right up my — well you get the picture. My friends are on the floor laughing and I’m on the floor in the fetal position. It was in that moment where I decided, “Yeah, maybe don’t try to show off at something that you’re bad at.”
About

LA is the heart and soul of the new America. A minority-majority city driven by power of diversity, inclusion, hard work, impossible dreams and an obsession with the future. But beyond its geography, LA is a state of mind, and we aim to connect with anybody who shares it, wherever they may be. LAist Studios exists to tell LA stories to the world.